On Black Friday Global you'll find all the information about Black Friday in Malaysia and around the world. We've examined this event in various markets so that you don't miss anything. What's more, you'll find the best discounts in your country (Malaysia) provided by Picodi - the best and biggest discounts provider on earth!

In Malaysia Black Friday is by far the biggest shopping event of the year. It always falls on the Friday after the Thanksgiving in the USA which occures on the 26th of November this year.

Collect this Lazada Black Friday free shipping on this landing page before it...

This Nike voucher code gives a 30% discount on your Nike purchase during Balck...

Tap here and enjoy a 15% discount on Universal Nutrition. No minimum spending...

Book your hotels with this Agoda voucher code and get a 5% discount! Click to...

Pick your favourite watches, dresses, heels and other fashion pieces from top...

With your Black Beauty pass, you can now get 20% off during Sephora's private...

November is the month of savings! Tap and get the best deal at the lowest prices...

All customers may enjoy Black Friday 2021 while saving 15% off with this Zalora...

For several years, Black-Friday.Global analysts have been closely following Black Friday trends in Malaysia and around the world. Below, we present a handful of statistics and interesting facts connected with the busiest shopping day in the world. 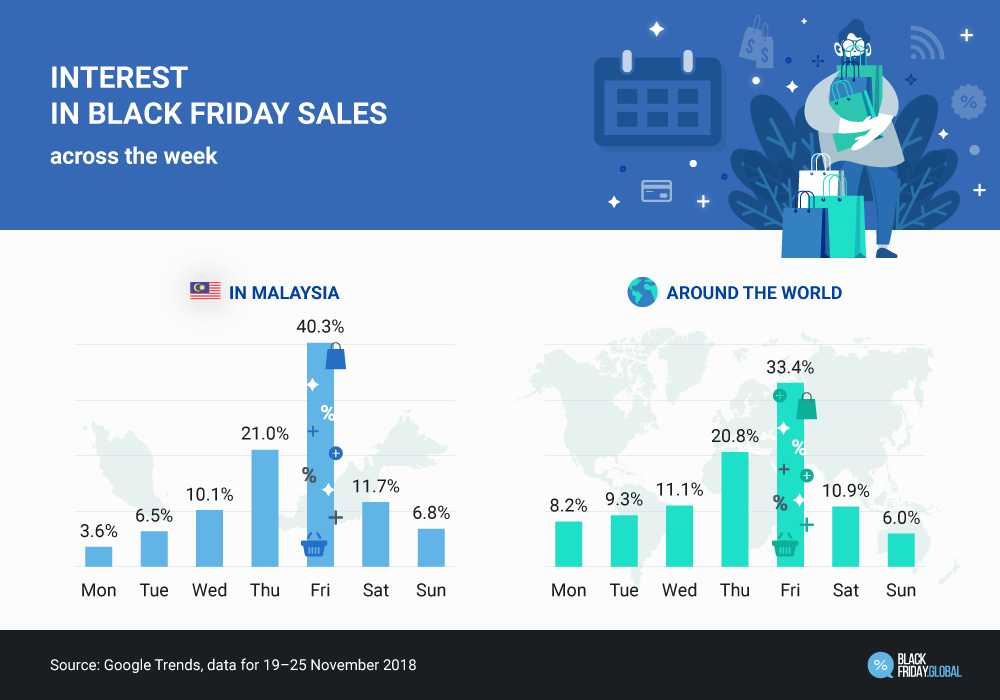 In the beginning, Black Friday used to be a one-day happening in the United States. However, over the past few years, the event has grown into a shopping marathon that lasts for several days. It may sometimes start on Thursday and continue until the end of the week, or even month. In an attempt to grab consumers’ attention, some stores start the so-called presales as early as Monday. Nevertheless, in most countries, the peak of shoppers’ interest falls on the same day. In Malaysia, Google Trends data for 19-25 November 2018 shows that more than one third of all queries related to Black Friday sales were recorded on Friday (40.3 per cent). Nevertheless, the interest of customers starts to grow on Wednesday and fades on Sunday. This tendency is characteristic for not only Malaysia but other countries as well.

The research conducted by Black-Friday.Global in 2018 shows that 56 per cent of surveyed Malaysians are aware of the existence of Black Friday. However, not all of them were able to recall the exact date, which may explain the gradual increase of interest in this event even a few weeks before it takes place (Google Trends). 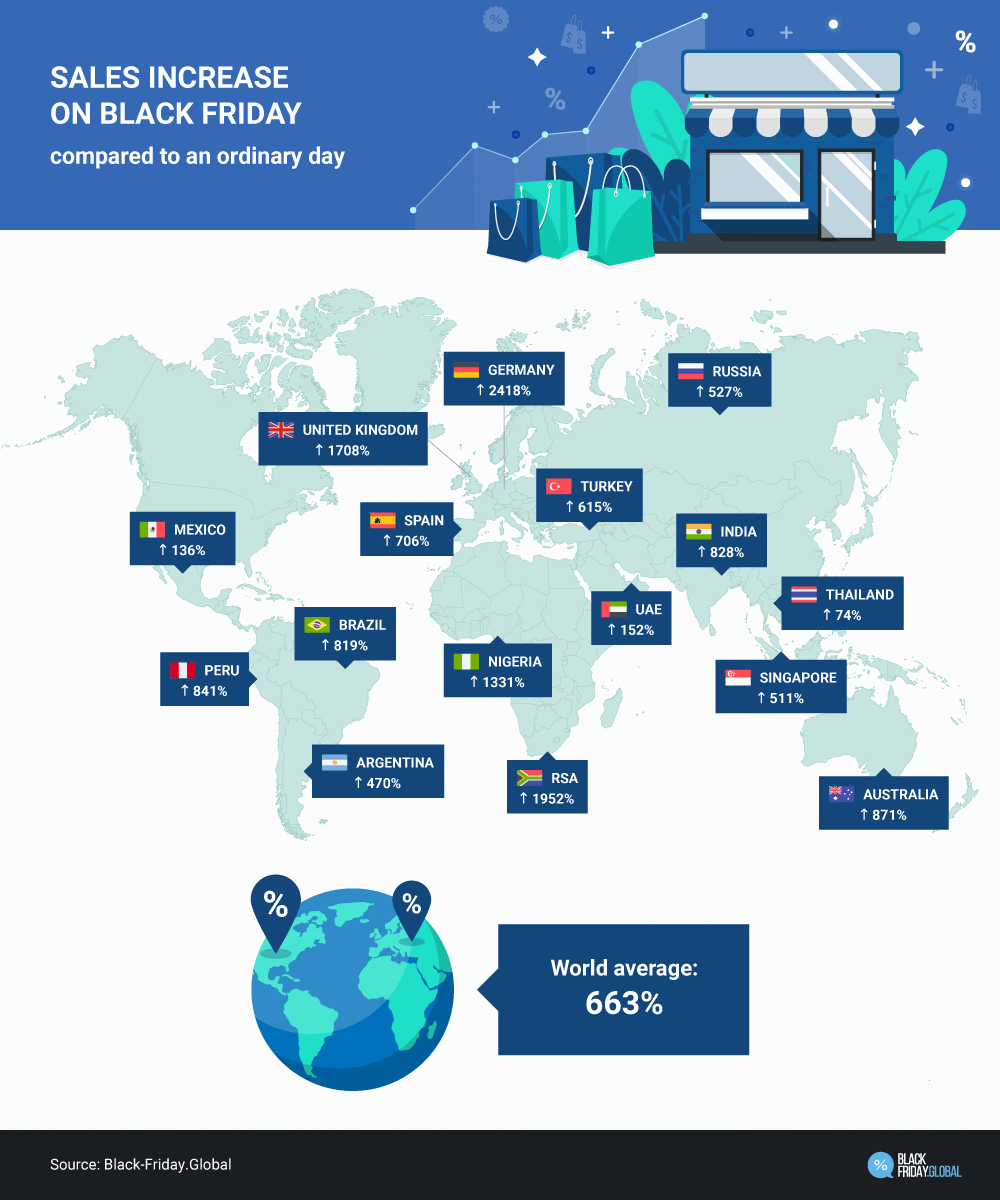 The internal Black-Friday.Global data for 2018 in Malaysia shows a 448 per cent increase in sales compared to an ordinary day. Such high numbers are not uncommon. For example, in Singapore the increase is 511 per cent, in the United Kingdom — over 1708 per cent, and in Germany — over 2418 per cent. 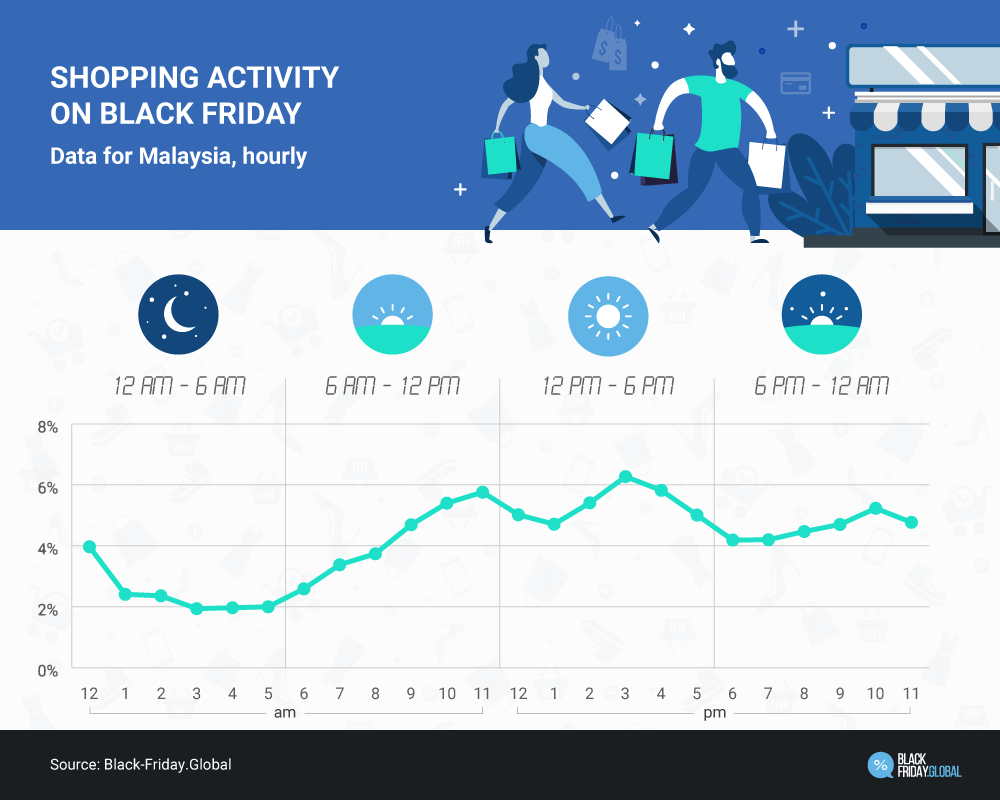 Unlike the United States, citizens of other countries do not usually have a day off on Black Friday. Although peaks of online shopping activity in various countries are slightly different, generally they fall on the morning and evening. On the Malaysian Internet, the intensity of shopping was distributed quite evenly between 9 am and 11 pm, with peaks at 11 am and 3 pm according to Black-Friday.Global data for 2018.

Statistical data from the past few years show that an average Black Friday discount in Malaysia has slightly decreased (from 61 per cent in 2017 to 59 per cent in 2018). Interestingly, these numbers exceed expectations of Malaysian consumers (who get ready for 51 per cent markdowns). 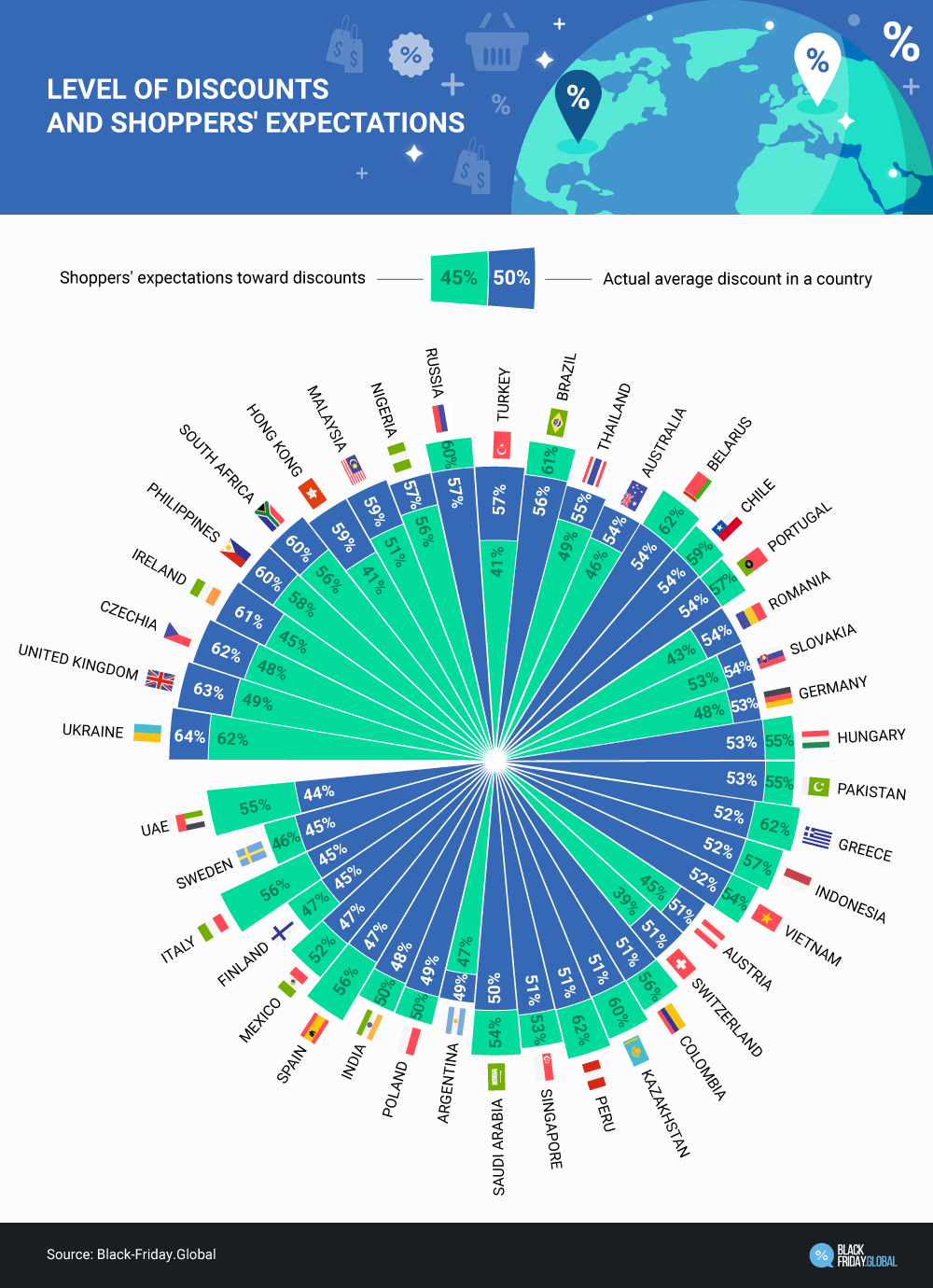 According to the survey, among Malaysians who are going to take part in the Black Friday frenzy, 59 per cent already know what to buy. As for the number of purchased items, Malaysians are going to buy 3.6 on average. Past years’ statistics indicate that the most popular categories of products among Black Friday shoppers in Malaysia are electronics, clothing, cosmetics and perfumes, shoes, as well as jewellery.

Around the world, widely-understood fashion products take the lead during Black Friday. Nonetheless, in some countries like Brazil, Switzerland, India, Romania, or Malaysia, electronics prevail in shopping carts. 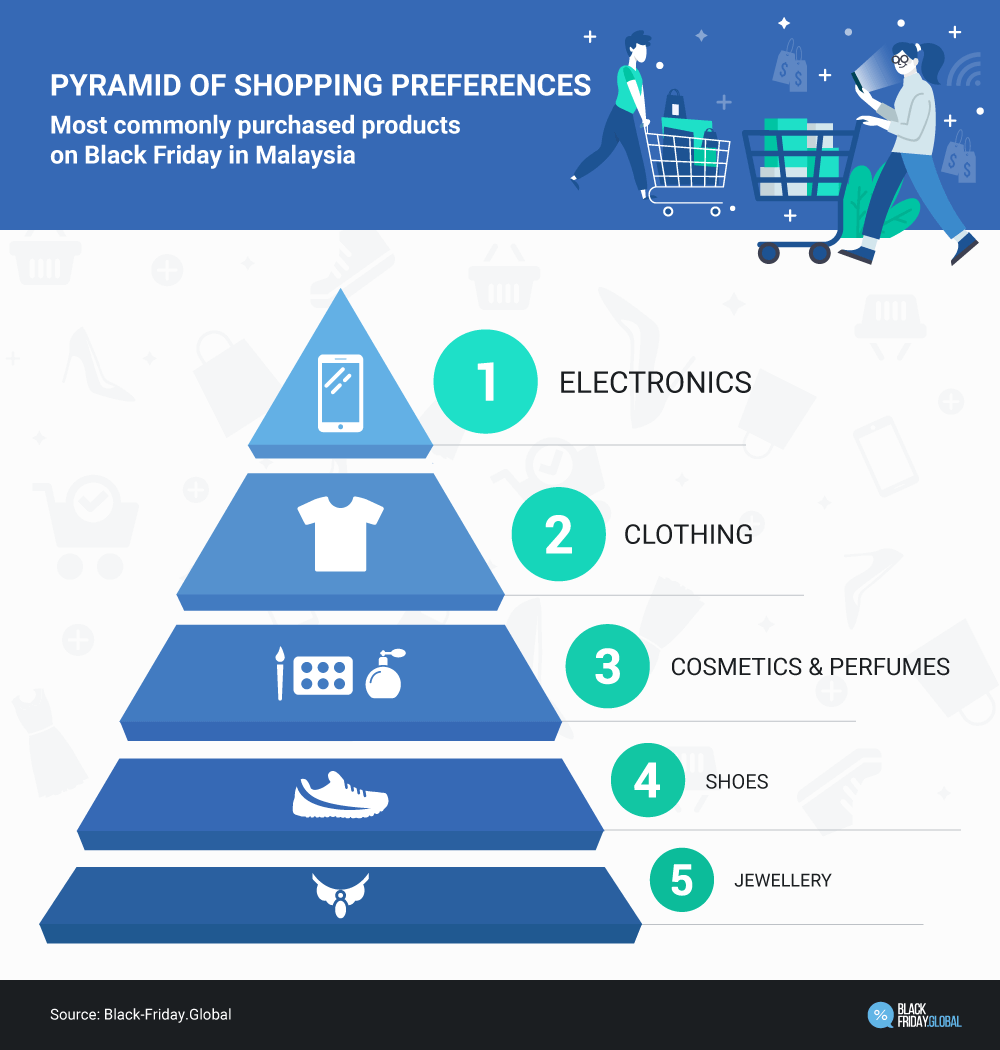 Malaysians are planning on taking part in both online and brick-and-mortar sales. Those who will choose more than one channel are ready to spend around RM290. It is equivalent to US$73. In other countries, shoppers have a smaller budget in mind, like Kazakhstanis (US$58) or Pakistanis (US$35). In contrast, consumers who declare to spend record-breaking amounts come from the USA (US$485), Canada (US$429), the United Kingdom (US$397), Ireland (US$339) and the United Arab Emirates (US$291). 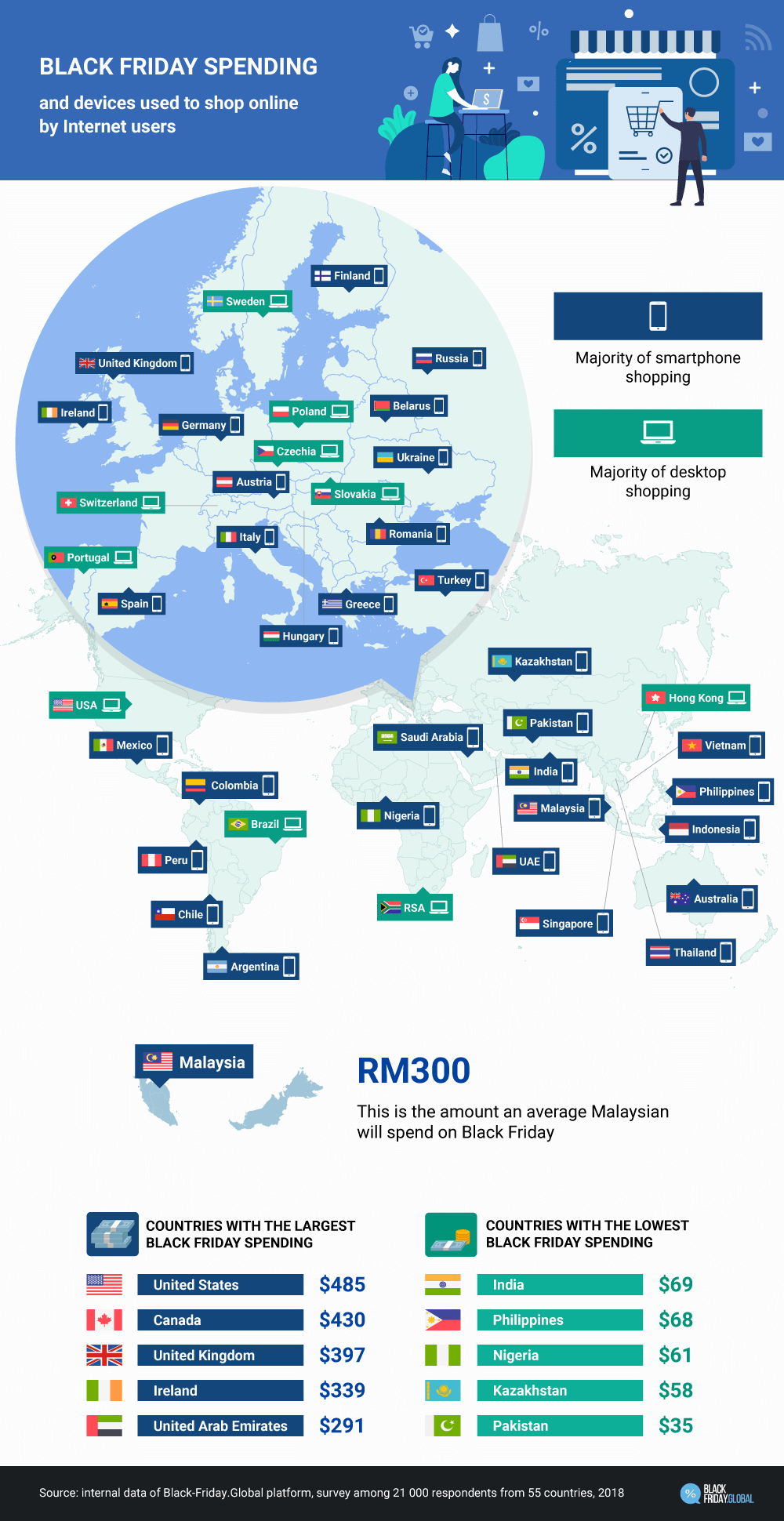 According to the data from 2018, when shopping online during Black Friday, more than half (56 per cent) of Malaysian customers used smartphones, 41.8 per cent preferred desktops, and the remaining 2.2 per cent chose tablets. Purchasing with smartphones was a global trend, noted among others in the United Kingdom, Germany, Turkey, or Indonesia.

This event, known previously only in the States, has gained a truly worldwide popularity within just a few years. In Malaysia – 56% of respondents know what Black Friday is.

How is the interest in shopping and discounts growing among Malaysian in November? Which categories of goods are characterised by the highest demand? How much money do Malaysian spend during Black Friday shopping craze and how are they different from the other nations? We’ve analyzed Black Friday statistics and conducted surveys in 55 countries to answer the above questions. Here are the results of our analysis. 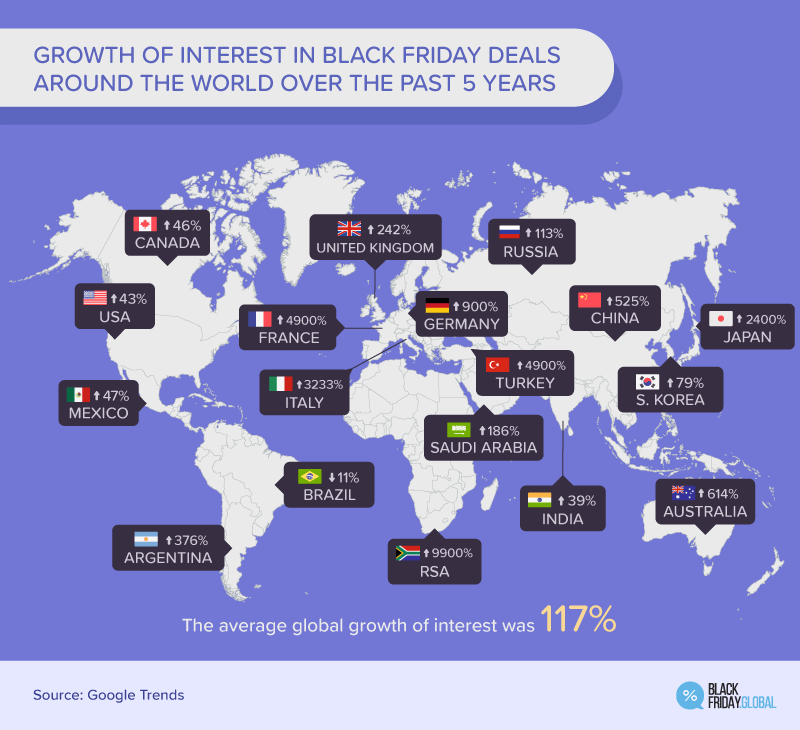 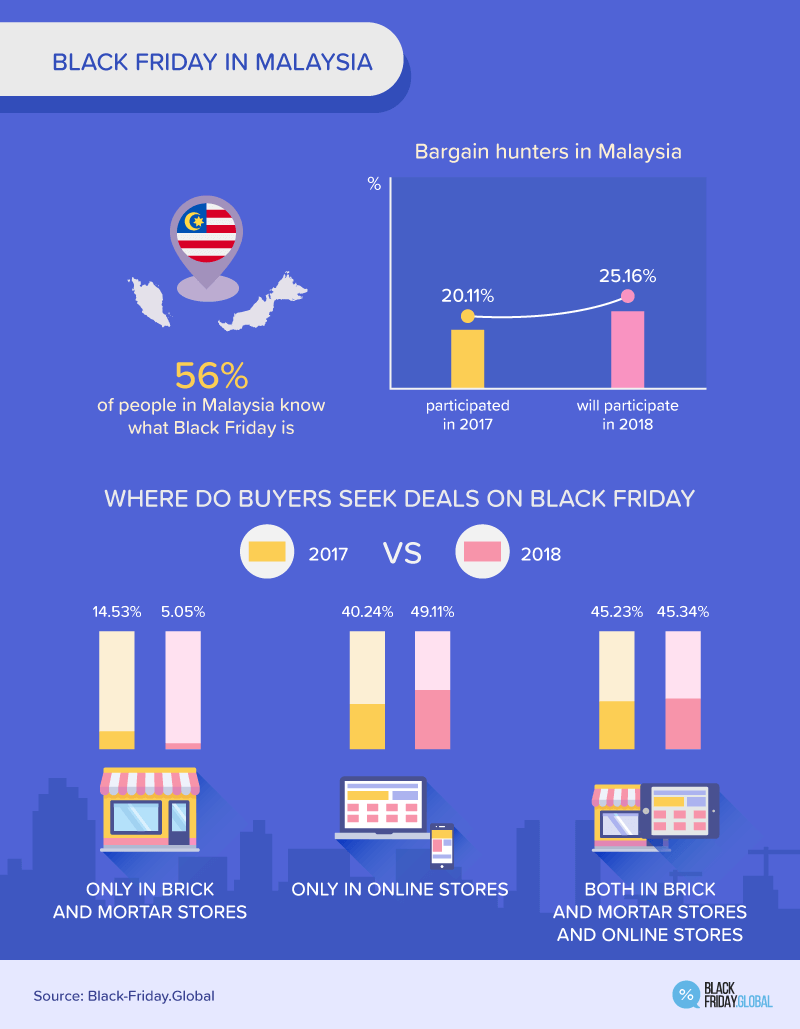 Over the past 5 years, the popularity of this shopping event has been growing consistently. The survey suggests that 1 out of 4 Malaysian will participate in Black Friday this year (an increase of 5 percentage points compared to 2017). The vast majority of consumers will shop both online and offline (45%), the rest will either opt for traditional offline-only (5%) or online-only (50%) option. For comparison, in 2017 the percentage of users choosing brick and mortar stores decreased from 15% to 5% only. 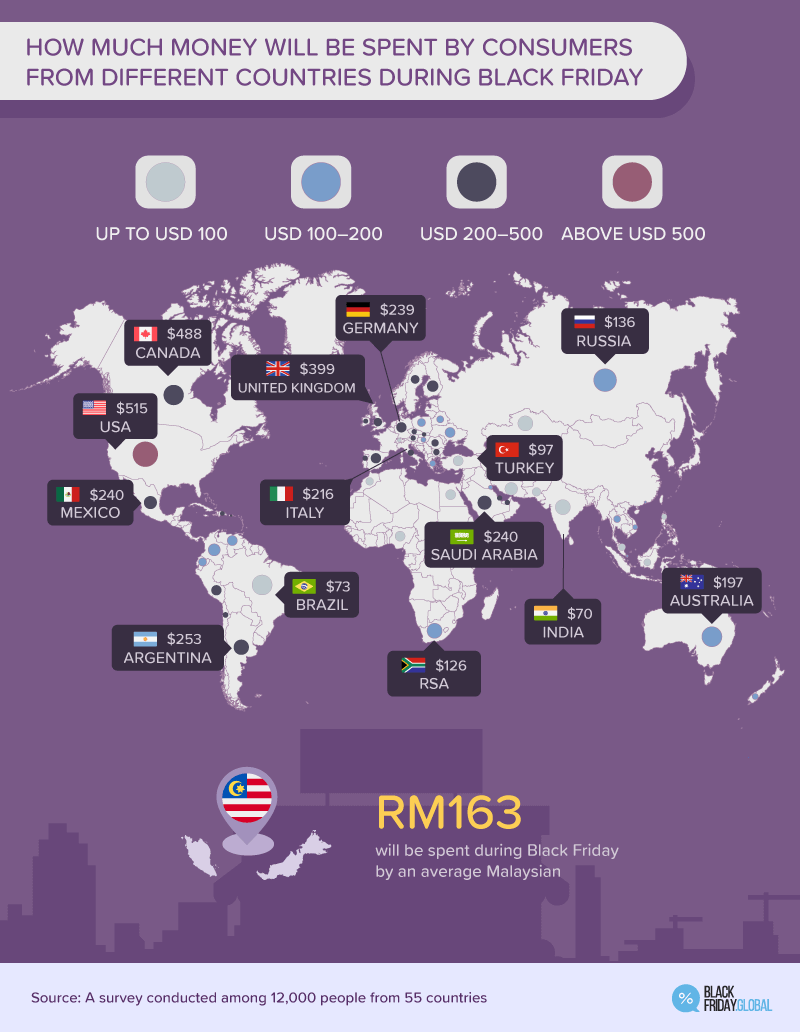 Average Malaysian bargain hunter is willing to pay RM163 in total for his/her Black Friday shopping cart. That is over RM500 less than consumers in Singapore, and RM162 less that Indonesian. 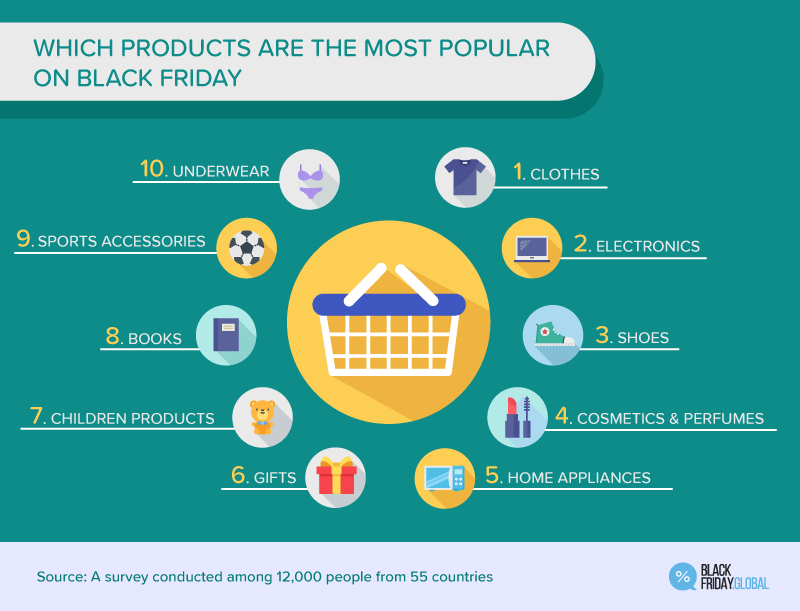 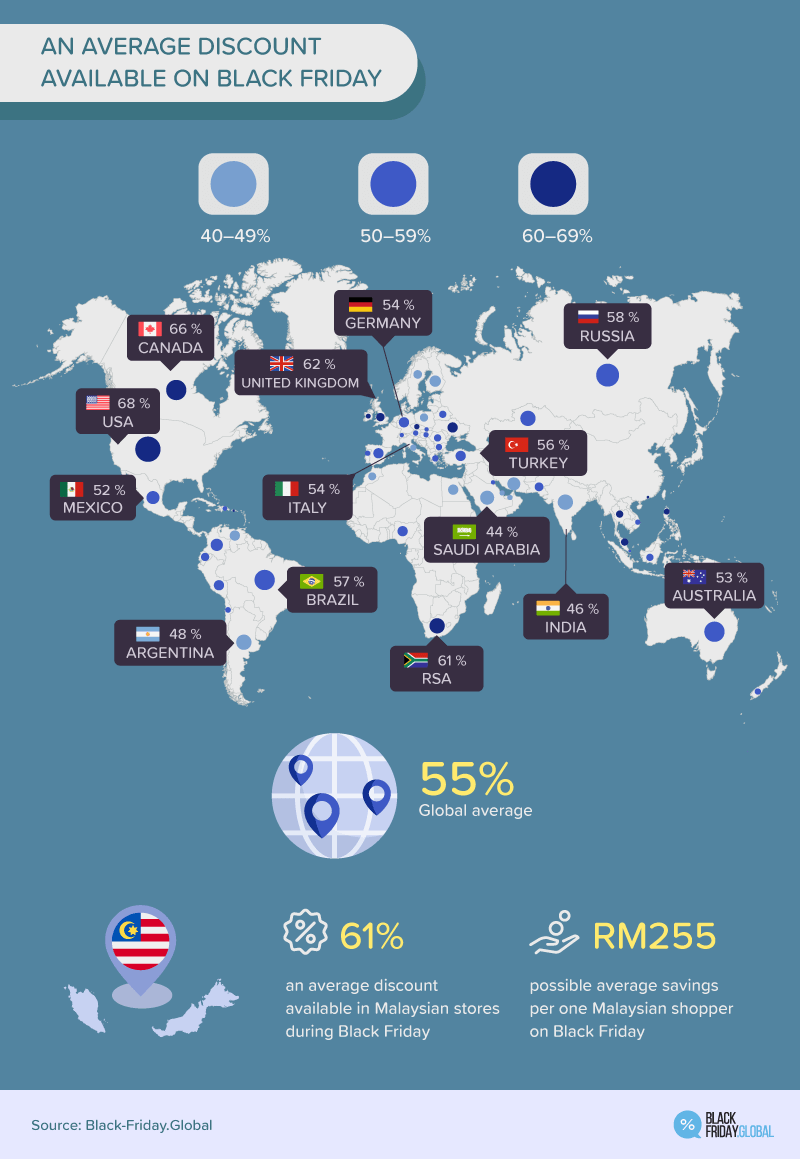 As the average discount in Malaysian online stores reached 61% last year, when forecasting Malaysia’s Black Friday 2018 expenses, it could translate into RM255 of possible average savings.

On average during Black Friday users enjoy 55% markdown. A true bargain hunters might even have the opportunity to grab some products for RM1!